Since running cross country all four years in high school and continuing into college, running is something Stephanie Thompson can practically do in her sleep. Starting her marathon career in 2004 while she was a junior at Norwich University, Stephanie has now completed about 58 marathons, 6 half marathons, multiple 10Ks and 5Ks, a couple sprint-distance triathlons, 1 Olympic-distance triathlon and 1 half-Ironman. Basically, Stephanie is unstoppable. Most of the marathons were completed between the years 2012 and 2016 when Stephanie made it her goal to run a marathon in every state and on every continent. So far, she has run a marathon in all 50 states as well as 5 continents, with only Europe and Australia left to complete. Working hard to complete this goal, Stephanie lives by the motto of ‘doing your best’. Her favorite quote is from Jim Evans, “The body achieves what the mind believes.” 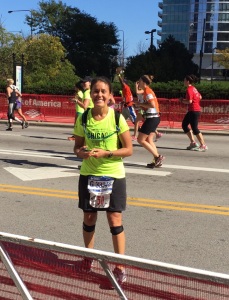 Born and raised in Martha’s Vineyard and moving to Sandwich, MA when she was 10 years old, Stephanie has always been involved in many non-profit organizations around Massachusetts. Currently, she works as a full time park ranger for the Army Corps of Engineers at the Cape Cod Canal. She also has her own running/coaching business, Warrior Runners, which is where she coaches individuals who are preparing for races. But it doesn’t stop there. This summer, Stephanie is hosting a trail run series across the Cape as well as a charity fundraiser in Sandwich on the morning of Sandwich Fest.

Deciding to run the Falmouth Road Race with the Xtra Mile team was no hard decision. While Stephanie may be taking a break from long-distance running, she still looks to participate as a charity runner. Becoming involved with the newly formed Special Olympics team in Sandwich, as well as being a disabled American Veteran, Stephanie is very happy to be running for SOMA and giving back to the community and the cause she strongly believes in. “I believe that everyone deserves that right – both abled and disabled bodies.”

Stephanie is motivated by her father, who is a polio survivor. “He has a disabled leg and hasn’t been able to run since the age of 5. I run for him because he can’t. He’s so proud of me, and I want to share my experiences, travels, and life’s journey with not only him but others along the way.” 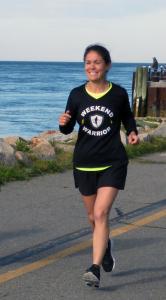 While the average time for a female running one mile is 9 minutes and 55 seconds, completing a 7-mile run in about 70 minutes, Stephanie plans to run the Falmouth Road race in under 50 minutes. With her athletic background, there is no doubt she will be able to complete her goal. In relation to her marathon goal, Stephanie says, “I am very proud of my determination to set lofty goals, train hard, and achieve them.”
We are so excited to see Stephanie cross the finish line and help thousands of Special Olympics Athletes. Best of luck!!

Please consider supporting Stephanie or one of the other Xtra Mile Falmouth runners!

Want to run Falmouth, bike in the Rodman Ride for Kids, or a number of other races? Join the Xtra Mile today!

There was an error retrieving images from Instagram. An attempt will be remade in a few minutes.